What is the difference between parkour and freerunning?

Both parkour and freerunning are modern forms of urban sports, in which the participants jump, climb and run through urban spaces with often many obstacles. The two sports look similar and involve similar actions, but in fact they have differing philosophies and objectives. 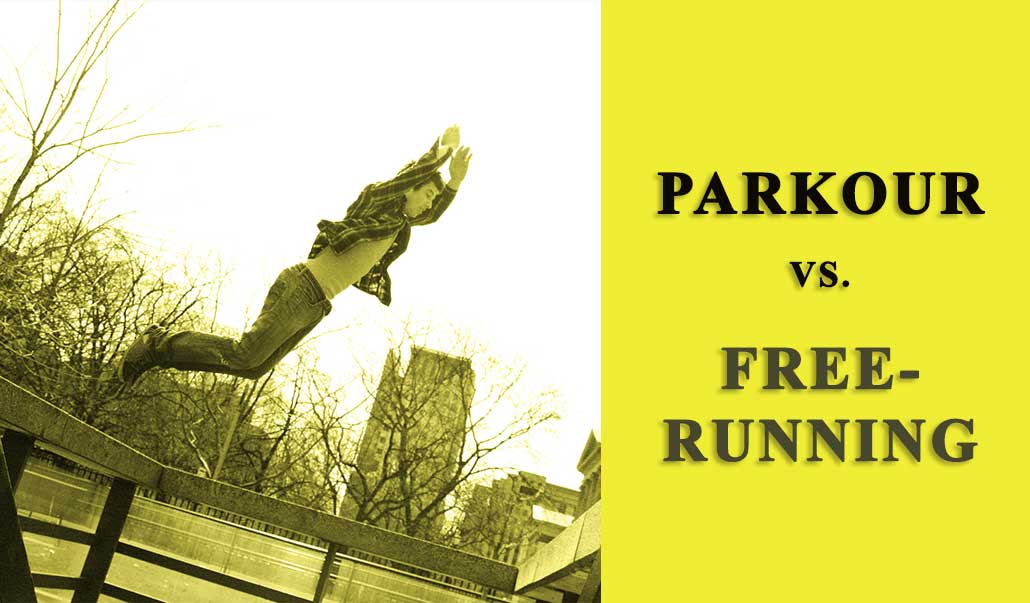 Parkour was developed by David Belle – a French athlete. The name is derived from the French word for “route”. The idea is to move from point A to point B via the most direct route between the two with certain movements. Choosing the most direct route often involves climbing walls, jumping over various objects and even running across rooftops, because parkour is an urban-set sport. It is based on the military obstacle route training.

Freerunning in fact was developed as a way to explain Parkour to English speaking people by another Frenchman Sebastian Foucan. But it eventually evolved into a separate discipline, which combines the common parkour techniques with gymnastics and acrobatics. Freerunning involves more creativity and improvisations. It is like a “flashier” version of parkour, with some stylish and fancy jumps, flips and other acrobatics.

Freerunning vs parkour – what they have in common

Both disciplines come from one common origin, and there are many specific movements and techniques for climbing and jumping which are used in both parkour and freerunning. They both put a strong emphasis on the awareness of the environment. In fact the two sports quite intertwine, so it can be a bit tricky to distinguish between the two. Footwear in parkour and freerunning is quite similar. For example, check the top brands here.

Difference between parkour and freerunning

The basic difference between the two urban sports is the philosophies of the two. In parkour, the philosophy is utilitarian, in that it is supposed to be helpful and useful, and not only to look good. On the other hand, freerunning has a creative and performance-oriented philosophy. It has a lot of self-expression, and allows more freedom and individuality, rather than adhering to strict rules. People who practice parkour are called “traceurs” and the others are “freerunners”.

As a whole, parkour is the more practical of the two and freerunning is more showy and artistic. Often people who practice parkour also practice freerunning, so there is more in common between the two than there are differences. Either way, these modern sports are excellent method of training not only the body but also for improved coordination, balance and increased overall strength. For people who would like to try these two interesting disciplines, there are specialized gyms and training programs where you can start learning and can practice the various jumping, climbing and other movements in a safer environment, rather than running across real rooftops and jumping walls.